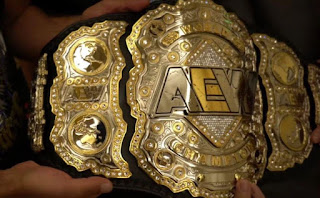 The first-ever AEW Championship Title  was reportedly stolen in Tallahassee.Chris Jericho's belt was allegedly stolen while the wrestler was eating at a Longhorn Steakhouse. According to a police report, Jericho left the belt in a rented limousine that returned to a nearby airport to return luggage that Jericho had taken in error. When the limo returned to the steakhouse the belt was missing. Cody Later today Said on twitter He prefers Outback better haha!

Too much bubbly got him misplacing things lol .. it happens . pic.twitter.com/nNMdpZleGO
— DJ DELZ aka THE SNEAKER ADDICT (@djdelz) September 4, 2019

Posted by ImAddictedToSneakers at Tuesday, September 03, 2019